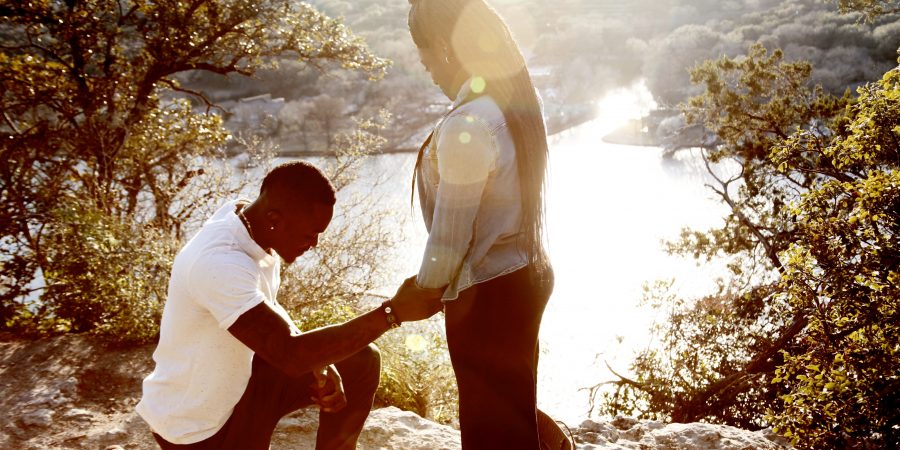 It was my very first off season going into my second year in the league when I made a decision that would change my life forever; asking my college sweetheart, for her hand in marriage! Typically in situations like this, you hear about how great of a day it will be (if she says yes, of course) but that’s not exactly how this one went. I thought I’d had it all figured out, location, attire, time, and even food, until it came time for Morgan to get ready for the big surprise. (Didn’t quite think that far through smh)

I knew it was going to go south when I asked her what it is she wanted to do on that specific day and she responded, “I don’t wanna do nothing at all, (yawns) I just wanna lay here and watch Netflix with you baby, I’m TIRED!”

Harder Than I Thought

Instantly I thought “FML”, because I already knew when she said those words, the only time she was willing to get up to do anything was to use the restroom… in other words, she ain’t moving lol.

After about five minutes of trying to convince her to get out of the bed, I began to get irritated. At this point, all I was thinking about was calling the engagement off. I know short temper gets you absolutely nowhere, especially dealing with women in a relationship scenario. This being my first serious relationship, I should’ve known better than to allow my ego to get the best of me and shut down, which happened more often than it should’ve early on.

Just when I about gave up, I shot a text to Morgan’s roommate / our college track & field teammate and great friend, Chamique Francis. At the time, she was dating one of my childhood friends who was also a Texas football athlete. I texted her in hopes of having her convince Morgan to get with the program. I said, “Look Mique, I’m tryna propose to this girl but she about to blow it, I need your help.”

I already knew Chamique would be on it. She’s been extra supportive since the beginning of Morgan and I’s relationship so I knew she would hold it down. She basically got Mo prepped without her even having a clue. I gave her money to get her nails done so that when she took photos she wouldn’t be pissed that her nails weren’t done (I know, I know… pats self on the back*). I also told Chamique to make sure she wasn’t wearing her usual track leggings and Nike T-shirt, but instead something more casual and comfortable but still cute enough for the occasion. While this was happening, I was out getting everything else set up.

Y’all, I was so unorganized and inexperienced that I thought you could go in ANY store and just buy roses…WRONG! I first went to HEB on Riverside which was around the corner from her apartment, just to find out they were out of roses as well as every other HEB in Austin, TX.

Mo is a big fan of outdoors and she loves flowers, so my mission for the whole engagement was to present her with 110 red roses, one for every week we’d been together at that point. I also wanted us to have a healthy outside lunch on a blanket with sandwiches, fruit, and juice, at the highest point in Austin, TX which was on top of Mt. Bonnell.

After having one of my fraternity brothers (Kappa Alpha Psi) Ebeneizer call all around Austin for roses, we finally were able to find a flower shop who would be able to get the roses the same day. I had Ebe pick up the flowers and made him assure that he would beat me to Mt. Bonnell and not screw up my not so perfect engagement plans.

On the way to pick up Morgan, I called Darnell Porter, my track teammate/ self made photographer and asked if he would be willing to make some money. I told him to meet me at Mt. Bonnell 30 mins before sunset. I picked up Mo and we head to the location which was about a 30 minute drive or so. We park and I ask her to wait in the car because I had a surprise for her. I sprint down the road to where Ebeneizer where he was secretly parked and grab the roses from him. Then I sprint back to my car where Morgan was waiting. Of course my five head is sweating and I’m nervous as hell already.

I opened her door and I give her the roses, I’m sure this is the most roses anyone has ever given her especially at one time; Hell it’s the most I’ve ever given to anyone as a collective in my life lol. Grateful, she steps out of the car as I grab the lunch from the back seat and we begin on our hike up the stairwell to the top of the mountain. “Coincidentally” we see Darnell and his girlfriend walking up the stairs, and Morgan says is that Darnell Porter!? What are you guys doing here!?

I got all bubble gutted and gassy because I’m like here it goes, imma have to drop all this shit on the ground and go ahead and propose right here, so I got ready but D. Porter saves the day by saying, “I’m about to get some shots on my camera of my girl at the top.” Sweating profusely, I gave him a “good job” smirk and he insisted we pose right there for a picture before we continued our hike up.

We finally get to the top of the mountain. I put the blanket down along with the food and London (our pet chihuahua), and begin to relax and eat. As the sun began to set, I gave Darnell a head nod which meant wherever we go, follow us and just get as many shots of the whole process as you can without being obvious.

Right before the sun began to set, I grab Mo’s hand and casually walk to a secluded area on the edge of the mountain over looking the river and all of Austin. That’s when I made my move.

I grabbed both of Morgan’s hands and gazed into her eyes so deep that I could feel our souls attach at that very moment. I was so nervous at first because I hadn’t known anyone in my entire family to get engaged. Well, at least no one shared how their experience was or even gave me advice on what to do it, but in that moment when we touched, my spirit took over and all a sudden I knew all the right things to do and say.

“My love, thank you for getting out the bed to come have lunch with me today, I know you were tired but you got up anyways.” I kissed her on the forehead and hugged her as she smiled and replied mhmmm you’re welcome baby.”

“Also, Thank you for bringing so much joy into my life, and being so patient with me. Dealing with all of my scars that I carry with me, you always seem to look past it and not let it annoy you. That does a lot for me and goes a long way with me because you could easily be in a situation where your relationship could be easier but you stayed with me. Why?”

She says, “because I love you.”

My emotions began raging because I’ve never felt more loved and appreciated in my entire life. At this very moment, I secretively pulled her in and hug her again to keep her from seeing my eyes water. As soon I get myself together I sneak the ring box out of my back left pocket with my left hand. Then I drop down to one knee worry free because to me she’s already answered… “will you marry me?”

She instantly kisses me and I stand up and dusted my knee off, still lowkey waiting for her to say yes or no. So I asked again after we finish lip locking and she says hell yea I’ll marry you!

6 Replies to “Marquise’s Point of View: Our Engagement”