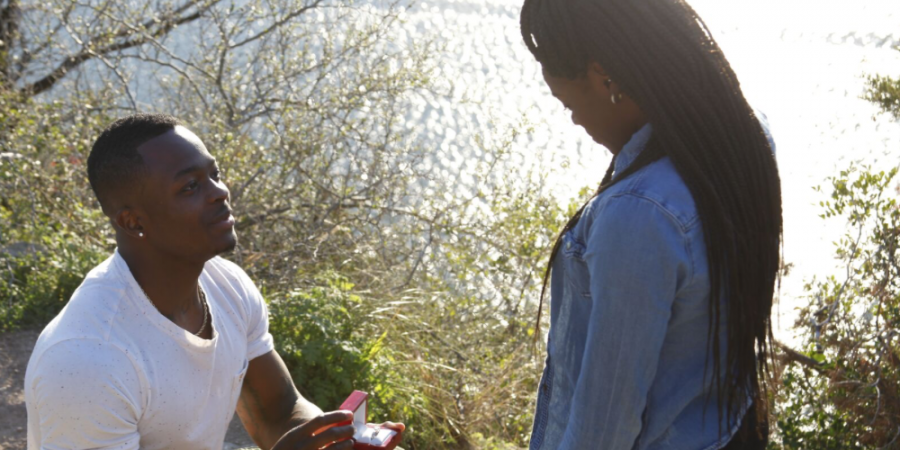 How My Husband Proposed

My husband proposed to me on Mount Bonnell in Austin, TX.  Mount Bonnell is a beautiful tourist destination. It sits alongside the Colorado River and it’s popular location to view the city, lake Austin and other surrounding hills.

I remember everything like it was yesterday. On Friday, March 14, 2014, my husband proposed. I was just a junior in college when he proposed. He had been in the league for one year, and was about to go into his second year. The day started off rough. We were arguing about something. I can’t really remember why we were arguing. Whatever it was about, it wasn’t very important.

It was spring break weekend and I had to go and practice on my own. While working out, I noticed Marquise pulling up to the track in his car. He watched me for a while and then  drove away. He would occasionally do creepy stuff like this. LOL.

After I finished my workout, I noticed that he sent me some photos. The photos were pictures of nail designs. He asked which nails I liked, told me to go get my nails done, and said he would pay for them. I went to go get my nails done after practice and didn’t think twice about it. After leaving the nail shop, I drove back to my apartment. I had my own car and my own place. We never officially lived together until we bought our first home. But whenever he came back to Austin, he stayed with me.

We planned to do a picnic, and guess, today was that day. Instead of wearing some comfortable clothes, he made me dress up. He also had my roommate convince me to put on makeup. I guess everyone else knew it was happening, except me. We were all supposed to go out to dinner that night, just because, so I thought. It was going to be me, Marquise, my roommate Chamique, and her boyfriend.

I hadn’t seen the roses he bought at this point, he managed to sneak them to one of our teammates. As we were on the way to Mount Bonnell, he said, “you know we’ve been together for 110 weeks?” I said, “how do you know the exact weeks?” “Instagram,” he proceeded. I was like “oh, that’s sweet and thoughtful.” I didn’t have no clue where he was going with all of this.

We get to our destination and he tells me to wait in the car. He got out of the car and was on the phone with someone. When he got back to the car, he had a big bouquet of red roses in front of my face. “It’s 110 roses for you my love,” he said. At this point I was like OMG he is being really romantic #HeartEyes. I still had no clue what he was up to. All I know is, I was in love.

As we were walking up the stairs to get to the top of Mount Bonnell, I saw my teammate, Darnell, and his girlfriend. I was shocked to see them. Darnell is the one who held on to the roses for Marquise. I thought it was a coincidence that Darnell was there. I figured he was about to do a photoshoot for his girlfriend. Darnell is a photographer; he is the one who took our engagement photos.

“Love must be sincere. Hate what is evil; cling to what is good. Be devoted to one another in love. Honor one another above yourselves” (Romans 12:9-10).

We finally get up and walk around the corner. The view was so beautiful. It was also kind of scary because we were standing on the edge of the mountain. Marquise begins his long, mushy speech again about how we been together for two years. Again, I still had no clue what he was up to. Darnell had managed to sneak around the corner and take some photos of us. I saw him and said, “OMG baby, you hired Darnell to come and do a photoshoot for us!” Again, I still had no clue he was proposing.

While he was saying his proposal speech, his voice started to crack. To my surprise, he got down on one knee and asked me to marry him. At that moment, I wanted to cry so bad but the tough girl in me tried to stop the tears. I dropped maybe about two tears #SideEye. Marquise was shocked that I teared up. I said yes!

Thinking back, I still can’t believe it. We were really young. I was only 20 years-old! Man, life works in mysterious ways. I am so happy to be able to share our story with all of you. I also hope you enjoy reading my blog. Stay tuned for more exclusive details about our relationship.

4 Replies to “How My Husband Proposed”